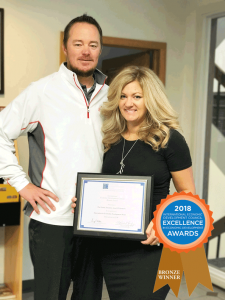 In hockey it’s called a hat trick. In terms of promoting economic development locally it is simply amazing! The Grand Junction Area Chamber of Commerce received a Bronze Excellence in Economic Development Award for its 2018 project in the category of Economic Development Week. This marks the third year in a row that the efforts of the Chamber have been recognized by the International Economic Development Council, a non-profit, non-partisan membership organization serving economic developers. With more than 5,000 members, IEDC is the largest organization of its kind. The award was presented at an awards ceremony on Tuesday, October 2nd, during the IEDC Annual Conference, which was held the first week of October in Atlanta, Georgia.

During ED Week held locally in May of this year, a successful campaign was launched to show that everyone in the community has a role to play in economic development. A video produced by our staff featured how economic development impacts everyone while social media efforts actively highlighted individuals and businesses who contribute daily to the local ED efforts. Lastly, a sold-out crowd attended our first-ever State of the Valley Luncheon which featured staff and elected officials from Grand Junction, Palisade, Fruita, and SD51. Offering updates and forecasts, attendees were given an up-close look into how our valley is preparing for the future!

IEDC’s Excellence in Economic Development Awards recognize the world’s best economic development programs and partnerships, marketing materials, and the year’s most influential leaders. These awards honor organizations and individuals for their efforts in creating positive change in urban, suburban, and rural communities.