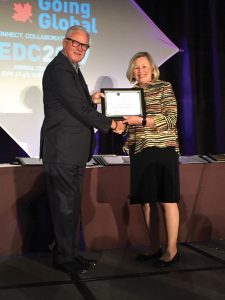 The Grand Junction Area ED Partners received a Bronze Excellence in Economic Development Award for its 2017 project in the category of Economic Development Week. This marks the second year in a row that the efforts of ED Partners have been recognized by the International Economic Development Council, a non-profit, non-partisan membership organization serving economic developers. With more than 5,000 members, IEDC is the largest organization of its kind. The award was presented at an awards ceremony on Tuesday, Sept. 19th, during the IEDC Annual Conference, which was held Sept. 17th to the 20th in Toronto, Ontario.

During ED Week held locally in May, a successful campaign was launched to let the business and community at-large know what the partnership has done and will continue to do for the community.

IEDC’s Excellence in Economic Development Awards recognize the world’s best economic development programs and partnerships, marketing materials, and the year’s most influential leaders. These awards honor organizations and individuals for their efforts in creating positive change in urban, suburban, and rural communities.