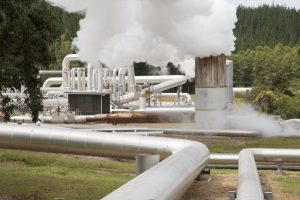 Join the Chamber on Thursday, February 11th for the monthly Energy Briefing Luncheon, 12:00PM at the Mesa County Workforce Center featuring Trent Yang, Director, Private Equity, AMG National Trust Bank who will be sharing information on geothermal power generation. Geothermal resources are reservoirs of hot water that exist at varying temperatures and depths below the Earth’s surface. Wells can be drilled a mile or more into underground reservoirs to tap steam and very hot water that can be brought to the surface for use in a variety of applications, including electricity generation, direct use, and heating and cooling. In the United States, most geothermal reservoirs are located in the western part of the country.

Commercial geothermal power generation is an established industry both in the U.S. and around the world. Italy was the first country to develop geothermal power commercially in 1914 at Larderello. This was followed by plants at Wairakei, New Zealand in 1958 and at the Geysers in California in 1960.